Naval history is peppered with many a fine ship, such as the HMS Victory, Sovereign of the Seas, or Soleil Royal. These mighty vessels were involved in some of the world’s defining battles, and in many ways shaped intercontinental relations in the years that followed. With over 200 years on the sea, the USS Constitution’s impact on U.S. naval success is unheralded. Read on to explore the legend and heritage of America’s greatest ever ships.

Following the end of the American Revolutionary War, with little established threats from the sea, the United States Continental Navy officially disbanded. But less than 20 years later, with American merchant ships facing ongoing threats from Barnaby pirates in the Mediterranean, first President George Washington created a permanent U.S. Navy with the Naval Act of 1794. It was this act that saw the birth of the USS Constitution, as part of an original fleet of 6 frigates.

Though construction was halted courtesy of a peace accord between the United States and Algiers, Congress finally fronted the remaining funds that saw the completion of the United States, Constellation, and Constitution. After a couple of hiccups surrounding its launch, the USS Constitution breached the Boston Harbour on 21 October, 1797, christened by Captain James Sever with a bottle of Madeira.

Although woefully inefficient, lacking range, and more difficult to operate than the artillery of modern-day ships, The USS Constitution’s guns and cannons made it a force to be reckoned with. Rated a 44-gun frigate, although known to carry greater than 50 from time to time, the Constitution was built for war. Equipped with 24-pounder (11 kg) long guns, 32-pounder (15 kg) carronades, and chase guns, this mighty frigate never once took a loss, claiming victory in 33 battles. The War of 1812 and the emergence of “Old Ironsides”

When the Napoleonic Wars first broke out, Britain established a naval blockade, in an attempt to obstruct neutral trading with France. The United States called out this action as being illegal, and after a series of ongoing conflicts between the two major powers, President James Madison introduced the American declaration of war. The British may have commanded the ocean when the war commenced, but the United States were far from outgunned.

Having sailed without orders to avoid being stranded at port in Boston, Captain Isaac Hull steered the Constitution on a northeast trajectory towards Britain’s shipping lanes situated near the Gulf of Saint Lawrence. On 19 August, 1812, a sail was scouted. That sail belonged to the French ship HMS Guerriere, which was now under British command following its capture in 1806.

Despite the Guerriere being outmanned and outgunned, Captain James Dacres would not shy from this opportunity to claim an American scalp. The Guerriere fired first, but was well off target. The Constitution returned fire occasionally, but largely held its shots until the range was decreased. The Guerriere fired 18-pound cannonballs directly at the Constitution’s triple-layered hull, but failed to make an impact. Rumour has it, a British sailor proclaimed, “Huzzah! Her sides are made of iron!” In this fated moment, “Old Ironsides” got her nickname.

Following these cannon exchanges, Hull manoeuvred to bring the ships to only 25 yards apart, before making his decisive strike. The USS Constitution unleashed a double-sided broadside to devastating effect, sending the Guerriere’s mizzenmast into the wild water. With her manoeuvrability failing, Dacres couldn’t prevent a collision with the Constitution.

After a bloody, 15-minute struggle, the ships broke away

Sharpshooters sprayed musket fire on the conflicting crews, as both sides scrambled to board their enemy’s vessel. After a bloody, 15-minute struggle, the ships broke away. Dacres now sported a wounded back, but the Geurriere’s fate was far worse. With 30 holes in its side, a downed mainmast, and bodies strewn across its deck, the battle was over. Dacres surrendered, and while the battle bore little impact on the war, it was a major boost for the American effort. Duel with the Java

After returning to widespread praise in Boston in August, the USS Constitution’s crew set off on another mission in September, under the command of Captain William Bainbridge. Targeting the British shipping lanes situated near Brazil, the American frigate encountered another British foe on 29 December. Bainbridge hailed the ship – the HMS Java under Captain Henry Lambert – but was greeted by a broadside which hammered the Constitution’s rigging. She recovered swiftly and countered with several broadsides to the Java. Bainbridge was wounded twice in these exchanges, taking a musket ball through the leg followed by a copper bolt to the hip when a shot demolished the ship’s helm. With the wheel gone, the Constitution’s crew used the tiller to steer, drawing nearer to the Java. The manoeuvre was effective, with two broadsides dismasting the Java.

Despite the disadvantage, the Java continued to fight valiantly, even when Lambert took a shot to the chest and was replaced by Henry Ducie Chads. After an extended fighting period, the Constitution finally gained the upper hand. Shifting into position off the Java’s bow, Captain Bainbridge readied the crew for a final broadside. But before the killer blow, Chads struck his colours, stating “it would be wasting lives to resist any longer.”

The defeat of the Java, which was considered beyond repair and subsequently burned, marked the third naval loss by the British in as many months. This drew an order from Britain’s Admiralty, stating that British frigates were to no longer engage their American rivals in one-on-one combat.

The USS Constitution continued to serve her country valiantly up until 1853, where she claimed her final prize off the coast of Africa – the seizure of the H.N. Gambrill, a U.S. schooner which was suspected of being used for slave trading. Since then, the frigate has undergone several restorations and minor repairs, and has been used as a training ship and later a museum. Now more than 200 years old, the USS Constitution is the world’s oldest seafaring ship, and remains a shining beacon of America’s naval history.

If you’d like to continue this legendary ship’s story, subscribe now to build your own 1:76 USS Constitution scale model! 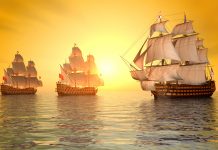