We all have our favourite TV characters, the ones we tune in to see each week (or binge watch in this age of streaming). But what about their cars? In the 70s and 80s, every show seemed to have an equally famous vehicle. The Batmobile in Batman. The General Lee in Dukes of Hazzard. The GMC Vandura in The A-Team. But as good as those were, there’s one that stood out from the crowd, that truly captured our collective imaginations. You guessed it, we’re talking about Michael Knight’s crime fighting Knight Rider car, K.I.T.T from the Knight Rider series. What made this car so incredible, and such a fan favourite? Keep reading to find out!

Choosing and Modifying the Pontiac Trans Am

As the story goes, the Pontiac Trans Am was the first choice of the Knight Rider creators. At the time, Pontiac was experiencing declining sales, and despite rejection from Pontiac sales promotion manager, Jim Graham, there was company-wide agreement that their car should feature in the show.

After confirming its involvement, modifications were required to transform the Trans Am into the Knight Industries Two Thousand aka K.I.T.T. The biggest change was modifying the car’s nose to give it the now iconic red light – a look that mimicked the Cylon Warrior from showrunner Glen A. Larson’s earlier show, Battlestar Galactica. Further modifications were made under the watchful eye of Pontiac’s design chief, John Schinella, with digital readouts, buttons, and screens providing the signature futuristic look. 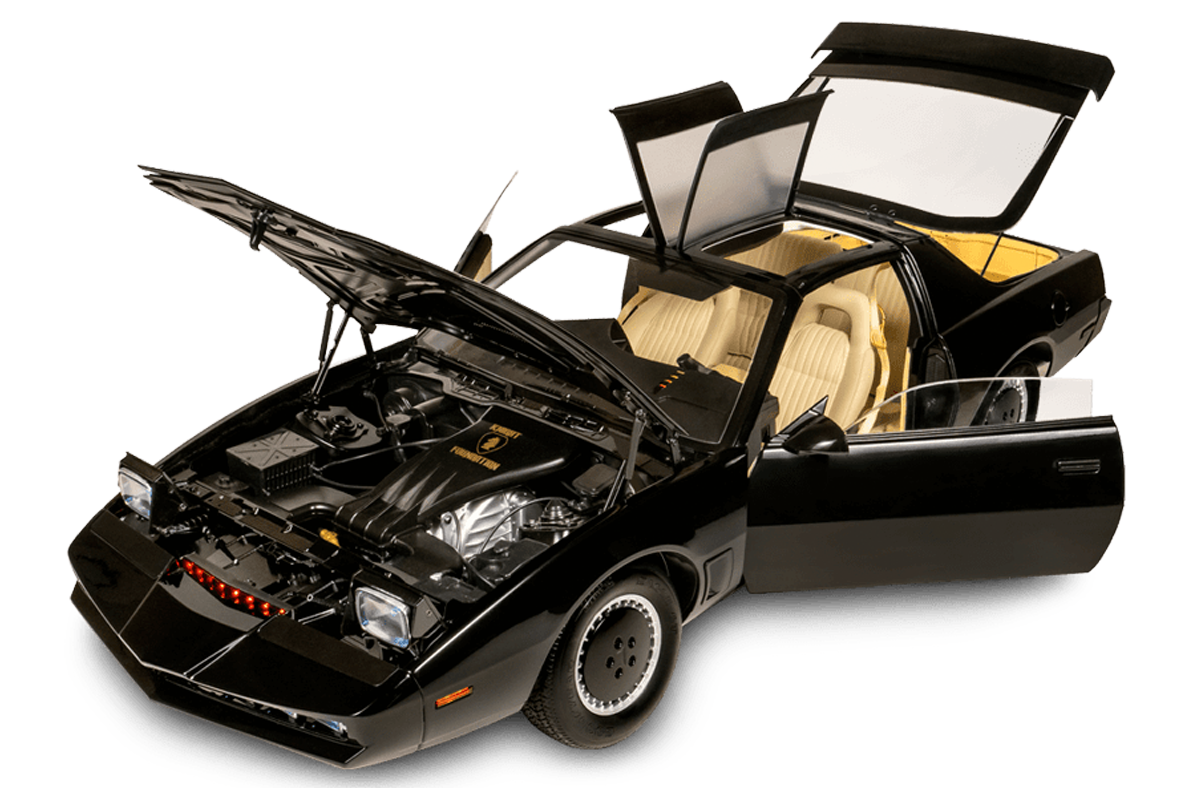 David Hasselhoff may have been the star of Knight Rider, but in many ways K.I.T.T. stole the show for fans. Combining artificial intelligence with some seriously cool gadgets, this was one car that everybody wanted to drive. Here are a few of the K.I.T.T.’s best features:

The first episode of Knight Rider aired on September 26th, 1982, introducing us to its fantastic new world with the now-famous title music and the following narration:

“Knight Rider, a shadowy flight into the dangerous world of a man who does not exist.”

The series became an instant hit, running for a total of 90 episodes across 4 seasons. During this run, both David Hasselhoff and K.I.T.T. became household names. Although the series came to an end, the Knight Rider story wasn’t completely finished. Three television movies were made, Knight Rider 2000 (1991), Knight Rider 2010 (1994), and Knight Rider (2008), the latter becoming the pilot episode for the 2008 TV series by the same name. In addition, there was another spinoff series called Team Knight Rider that ran from 1997 to 1998, and in 1988 French comic book artist and press illustrator Angelo di Marco created a comic series based on the show titled K2000.

Though the original series has faded like many 80s classics, the impact of its famous car lives on fondly in the memories of all fans. If you’re looking for a true, hold-in-your-hands way to relive all your favourite Knight Rider adventures, the Fanhome 1:8 scale Knight Rider car replica is for you! Complete with stunning features including the dynamic red scanner, illuminating headlights and brake lights, and a rotating mechanism that allows you to change the famed “KNIGHT” license plate, this is one scale model you don’t want to miss. Start your Fanhome subscription today, and bring your Knight Rider car to life!