The evolution of Iron Man’s armor

The constant evolution of Iron Man’s iconic armor has captured our imagination because of its ever-changing nature. And here we will embark into the complex world of his armor: from its original design to its most powerful upgraded versions, through the debate surrounding possible materials used, and where you can get hold of a real-life model.

Iron Man’s original armor was very crude compared to all subsequent designs. This original model, also called Mark I, was part of an escape plan and was made from scrap metal in secret during a time when Tony Stark was being held prisoner. Basic as it was, the Mark I managed a short burst of flight and was equipped with a flame thrower and missile launcher, and this was enough to secure his escape.

The evolution of Iron Man’s armor is a constant throughout both the comic and the films, but for practicality’s sake, here we’ll focus on 6 suits that appear in the Marvel Cinematic Universe.

Flight was to be an important feature of the armor, and therefore it was a focus for improvement. The first designs were met with issues; the original Mark I managed just one short burst before sputtering and cutting out. The Mark II, although demonstrating impressive flight abilities, could not be flown at high altitudes due to freezing and a build-up of ice.

These issues, however, were fixed in the design for Mark III, which became the first reliable flying suit, as well as the first suit to carry Iron Man’s iconic red and gold colours. The next notable improvement to flight came later with the arrival of the Mark L. This version incorporated rocket thrusters which allowed deep space travel.

As Iron Man’s armor evolved, his suits also become more portable and practical. Despite the suits’ impressive complexity, or perhaps because of it, the first armor designs were extremely fiddly; to get inside the suit, Tony Stark required an industrial-style machine to dress him, piece by piece.

The practicalities of putting on the suit greatly improved when the suit became more portable. The first example being Mark V, which folded out from an inconspicuous travel suitcase, which once opened was reasonably easy to put on. Much later, other versions saw nanotechnology incorporate the suit directly into Stark’s chest, where it would come out from inside his arc reactor and automatically build itself around his body.

His most powerful suit

Throughout the Iron Man series, the armored suits develop into advanced and heavily armed killing machines. The armor starts out with the flame throwers and missile launcher on Mark I, and quickly evolves to incorporate other weapons. Designs that follow add repulsors, which forcefully repel solid objects by sending out bursts of energy, machine guns, and metal–slicing lasers. These weapon upgrades culminate in the ultimate and most powerful Mark LXXXV suit; a suit that has the ability to form an infinity gauntlet which yields godlike power to its wearer.

What the suit is made of

Despite the name, Iron Man’s suits simply could not be made of iron. Iron isn’t bulletproof, it’s extremely heavy, and it’s nowhere near as strong as his armor. In the comics, a material that is frequently mentioned in relation to his armor is gold-titanium, but this is also not light enough. Seeing as there is also no indication of materials during the film series, there is a lot of speculation on what the armor could realistically be made from.

There are other materials that closely match Iron Man’s armored needs. One of these is Nickel-Titanium. It’s extremely light and can be reformed after sustaining damage, much in the same way Iron Man’s Mark L regenerates itself. Another is graphite reinforced carbon fibre, which is excellent at withstanding heat, and would ensure that Stark’s boot rocket launchers didn’t burn off his feet as he launched.

While the US military has designed an exoskeleton inspired by Iron Man’s suits, unfortunately this is not available commercially. Luckily, there are other options; for those fascinated by the ins and outs of Iron Man’s armored suits, Fanhome offers an impressively detailed and true-to-life 60cm model of Iron Man’s incredibly iconic Mark III. With no less than 52 articulation points, and LED light-up eyes, repulsors, and arc reactor, this licensed Marvel Studios replica looks and poses precisely like the film version. The model kit also comes with a step-by-step guide which instructs you on how to build the model, as well as teaching you about the background and workings of the suit.

The evolution of Iron Man’s armor is where science meets fiction, and so it’s no wonder that Stark’s constant tweaks, redesigns and creativity holds our interest.  Whether it’s through a cosplay costume or a smaller model replica, may the magic of Iron Man’s armor live on in us all. 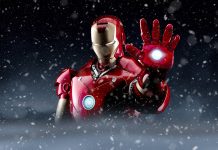