Street Fighter’s female characters are diverse, determined and specialist fighters. They’ve been growing in numbers since Chun-Li’s appearance as the first female playable character in 1991, and the question now is: which female street fighter is the best?

Chun-Li is a Chinese Interpol officer and expert in martial arts. Despite being driven by her sense of justice and desire to protect, she is full of vengeance and ever seeks revenge for her murdered father. Her fight style is centered around her strong muscular legs, and she quite literally kicks the hell out of her opponents. 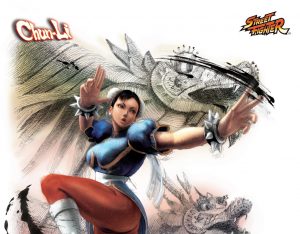 Cammy White is a brilliant close-range combatant. She started life as one of M. Bison’s female clone assassins, but she broke free from the evil Shadaloo and became an MI6 operative for the British government. She is kind, caring and a dangerous combatant. Thanks to the abilities she was given during her assassin days, she is a impressive and athletic fighter and knife-thrower.

Makoto is a young, fearless Japanese fighter on a mission to revive her family’s dojo. Her fight style is her family’s own traditional Rindo-kan karate, and she’s a competitive and no-nonsense fighter. She’s serious, focused, relentlessly motivated and will fight anyone.

Rose is a wise and enlightened Italian fortune teller on a mission to rid the world of evil. She fights with her psychic power called ‘soul power’ which she releases in the form of colored energy. She’s a formidable fighter both on the attack and on the defense, and she is independent and wise.

Elena is a young and cheerful Kenian Capoeira fighter. She was sent to fight abroad to find the growing evil in the world which is afflicting her tribe back in Kenya. She is a healer with a strong connection to nature and can regenerate her own health during a match. Her fight style is Capoeira-based and utilizes her long, muscular legs.

Not all characters in Street Fighter are heterosexual or cisgender. Although Capcom prefer to leave specific characters’ gender and sexuality open to interpretation, the general understanding by fans is that Street Fighter includes quite a few members of the LGBTQ+ community.

Juri is a ruthless South Korean Taekwondo fighter who is bent on avenging her parents’ murder. She is widely recognized as bisexual due to the way she sadistically flirts with her opponents during fights. Her combat style is centered around kicks, and she is best at fast-paced, surprise attacks. 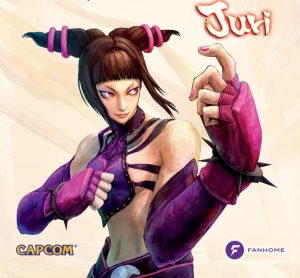 Poison is a transwoman and ex-gangster turned wrestling manager from LA. She uses a whip and handcuffs when fighting, and her fight style is a fusion of wrestling, street fight and acrobatics. She first made an appearance as a non-playable character while Street Fighter was still all-male. And in fact, she was originally included as a replacement for a ciswoman, because hitting ciswomen seemed too unsavory. Despite her questionable beginnings, she’s grown into a powerful and much-loved fighter.

While in non-canon Street Fighter comics Ryu has had romances with both Chun-Li and Chizuru, in canon lore he’s more preoccupied with controlling his inner demons than looking for love. That said, he’s constantly sought out by Sakura, and they have discussed the strength required to start a family. Could it be love?

Sakura is an awkward yet determined and hardworking Japanese teen. Completely starstruck by Ryu, she follows him around the globe and teaches herself to fight from watching and copying his moves. She’s confident, upbeat and hardworking, and she desperately hopes to become his apprentice.

Kimberly is Street Fighter’s first female African American, and she is a child prodigy who one day decided to become a ninja. She learnt to fight from Street Fighter’s Guy and emulates some of his moves. She practices ninjutsu and integrates spray painting into her combat.

The best thing about our female street fighter heroes is their individual and unique fight styles combined with complex and detailed back stories. So, if you’re looking to bring your heroes to life, an official hand-painted collection of Street Fighter figurines by Fanhome might be just what you need. The collection is made up of quality PVC models of your favorite fighters and includes Street Fighter lore and intricate details on characters’ backstories and technique.

The Street Fighter characters mentioned above are remarkable, individual, and outstanding fighters, but the list of female street fighters is ever growing, and so the battle to be the best and to come out on top is nowhere near over.